When it rains heavily in Hawaii, lava pours from the volcano Kilauea, according to a new study facing strong scrutiny by some volcanologists.

Starting in May 2018, the volcano dramatically ramped up its 35-year-long eruption, opening 24 new fissures and shooting fountains of lava 80 meters into the air. Within three months, the volcano had unleashed as much lava as it normally produces in 10 or 20 years, according to rates of average lava flow going back decades.

The new study, published April 22 in Nature, suggests that the volcanic episode was triggered by heavy rainfall in the months preceding. The idea is that large amounts of rain seeping into the ground increased the pressure within the rocks, creating zones of weakness that then fractured. Those fractures presented “new pathways for molten magma to make its way to the surface,” says study coauthor Jamie Farquharson, a volcanologist at the University of Miami in Florida.

Precipitation data from satellites indicate that Kilauea received more than double the average amount of rainfall for the first quarter of 2018. Kilauea’s rocks are highly permeable, which allows water to percolate several kilometers deep, close to the magma chamber. Farquharson and geophysicist Falk Amelung, also at the University of Miami, used computer simulations of how pressure exerted by that water on the walls of pores in the rocks would have increased as more rain fell. Though those pressure increases were less than the pressure exerted by daily tides, they were significant enough to have caused the rocks — already weakened by years of volcanic and seismic activity — to break and allow lava to flow, the team found.

The “most compelling” evidence for the rain-trigger theory, Farquharson says, came from archived records going back to 1790 that show that “eruptions seem to be approximately twice as likely to begin during the wettest parts of the year.”

The researchers also say that the data they looked at showed a lack of substantial ground uplift at Kilauea’s summit and throughout the volcano’s plumbing system. Significant uplift would be expected if the eruption were caused by new magma pumping to the surface.

That finding, however, directly contradicts observations by the U.S. Geological Survey’s Hawaiian Volcano Observatory. Those data showed significant ground deformation, indicating an increase in belowground pressure, at Kilauea’s summit before the fissure eruption, says Michael Poland, a USGS volcanologist based in Vancouver, Wash.

“We’re skeptical of the [new] findings,” Poland says. He and his colleagues are preparing a response “that argues for a different mechanism for the eruption, and highlights the data that the authors might have missed.” 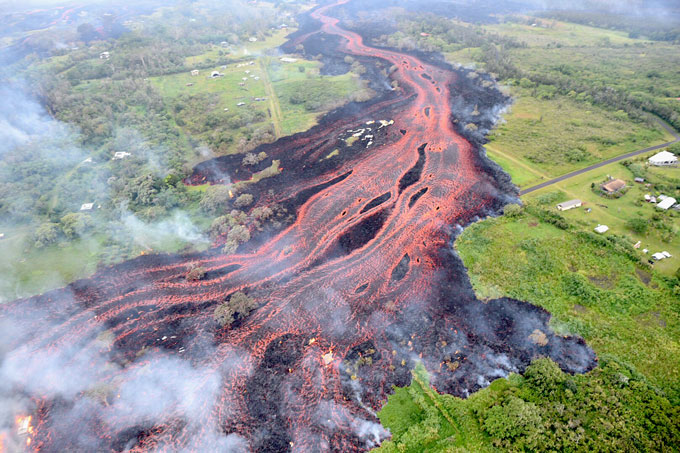 For about three months in 2018, Kilauea released as much lava as it normally produces in 10 to 20 years. Here, a lava river flows on May 19, 2018, from a newly opened fissure.USGS

For example, at the volcano’s Puu Oo cone, where most of the volcanic activity had occurred from 1983 to 2018, scientists observed ground motion caused by underground pressure changes beginning in mid-March. “We attribute this to a backup in the plumbing system — basically the amount of lava that was being erupted [at the surface] started to decrease, a bit like kinking the hose,” Poland says.

Pressure built up at Puu Oo and then backed up through the magmatic system to Kilauea’s summit, 19 kilometers away, increasing overall pressure within the system. Earthquake activity also increased, likely because of increased pressure on the rocks, Poland says. The level of the lava lake within the summit’s caldera also rose — “a direct measure of pressure,” he says. For the new study to be correct, scientists would have had to see a “whole system that did not pressurize beforehand.” And they didn’t, Poland says.

Poland also sees problems with the team’s other evidence. For example, Farquharson and Amelung report that 60 percent of Kilauea’s eruptions since 1790 have occurred during wet periods, but then “even they equivocated,” Poland says, implying that statistically “it could be by chance.” And the plumbing system beneath Kilauea is so complex that most computer simulations are too simplistic to determine how water is moving and affecting pressure on the rocks at depth, he says.

But the idea that rain could cause weaknesses in the ground that lead to volcanic eruptions is “interesting,” and even plausible, Poland says. It’s the same principle shown in studies to cause earthquakes at fracking or wastewater disposal sites, where fluids are injected into the ground either to increase pressure on the rock and push natural gas out or to store the wastewater (SN: 1/18/18).

“This research is super exciting, especially because it is very interdisciplinary,” says Thomas Webb, a volcanic meteorologist at the University of Oxford. He particularly likes the approach linking cycles of pressure inside the volcano with meteorological conditions.

One interesting question that the study raises, Webb says, is whether rainfall increases due to climate change could affect how volcanoes behave (SN: 12/10/19). “I would really like to see future work from these authors” addressing those potential implications.