Mangrove forests can only take so much. The famously resilient, salt-tolerant and twisty trees have so far managed to keep pace with rising sea levels, providing a valuable buffer to coastal communities against pounding storm surges. Now, researchers have found the forests’ limit.  Mangroves cannot survive in seas rising faster than about 7 millimeters per year, the scientists report in the June 5 Science.

That could drown the forests, which act as a buffer protecting many coastlines around the globe by reducing erosion from tides and dampening the energy of storm waves sweeping ashore. And mangroves come with additional boons, says Neil Saintilan, a biogeographer at Macquarie University in Sydney. They provide a safe nursery habitat for tropical fish and help reduce atmospheric levels of the climate-warming gas carbon dioxide.

Mangroves are carbon-sequestering engines, drawing carbon dioxide out of the atmosphere and swiftly burying it in soils. From about 8,600 to 6,000 years ago — a period of particularly rapid expansion for the mangroves — this coastal ocean–based “blue-carbon” storage by the mangrove forests amounted to about 85 petagrams of carbon, enough to lower atmospheric carbon dioxide levels at the time by about 5 parts per million, Saintilan and colleagues estimate. Currently, the average concentration of carbon dioxide in Earth’s atmosphere is about 417 ppm.

These valuable forests are typically resilient to changes in sea level, holding their ground by building up sediment amongst their tangled roots. Scientists have observed this in the modern era, Saintilan says, by recording how quickly sediment accumulates and the land surface elevation within the forests rises.

But those data span only a few years to perhaps a decade or two, he says. As a result, there have been two big unknowns: How long mangrove forests might be able to keep up this balancing act; and at what point the seas might simply rise too quickly for the trees, drowning the forests. 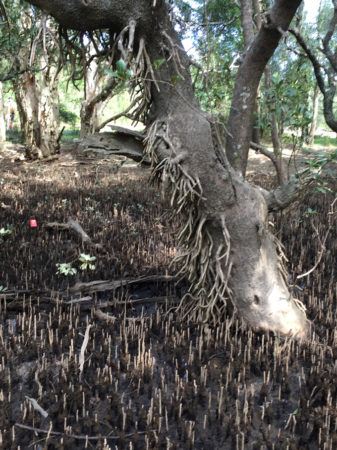 New mangroves form from slender seedlings called propagules, which drop from the trees into the shallow water and float until they take root in a new location. Coastal mangrove forests can buffer nearby communities from storm surges and accumulate new sediment around their roots, building up new land and sequestering carbon.N. Saintilan

How quickly the seas rise over the next century will depend on the rate of global warming, which causes seawater to expand and ice sheets to melt — and that, in turn, depends on rates of greenhouse gas emissions.

To understand how mangroves may respond to faster-rising seas, Saintilan and colleagues turned to the past. The peak of the most recent ice age was between about 26,000 and 20,000 years ago. After that, the ice sheets began to retreat as the world warmed, and sea levels began quickly rising, at rates faster than 12 millimeters per year.

Saintilan and colleagues focused on a time period between 10,000 and 7,000 years ago, as sea level rise began to slow and mangrove forests began to appear. The researchers examined previously published data on 78 organic carbon-rich sediment cores collected from coastal sites around the planet, and compared those with computer simulations of sea level rise rates for each site, to assess when the waters rose slowly enough for mangrove forests to grow.

The forests did not grow until the sea level rise had slowed to an average global rate of 6.1 millimeters per year, the team found. Today, under a scenario of high greenhouse gas emissions, sea level rise will accelerate to about 6 or 7 millimeters per year within the next 30 years. Even under mid-range scenarios that include cuts in greenhouse gases, the rate of rise will exceed that threshold by the end of the century, the researchers note. At that point, the mangrove forests sheltering many coastal communities will be unable to keep up, the researchers say.

“The future of the world’s mangroves is in our hands,” Saintilan says.

Establishing a threshold for mangrove survival is key to future coastal management, writes Catherine Lovelock, an ecologist at the University of Queensland in Australia, in a commentary in the same issue of Science. The threshold itself may vary by mangrove species or by the frequency and intensity of the storms that strike a particular coastal setting, she says.

The findings also underscore the need for the world to “quickly and aggressively” act to mitigate greenhouse gas emissions, says ecologist Holly Jones of Northern Illinois University in DeKalb, who was not involved in the new study.

In a study published May 29 in PLOS ONE, Jones and colleagues estimated that mangrove forests currently help protect about 5.3 million people around the world from storm surges and other effects of sea level rise. “It is especially painful to think that through our actions, we could be causing mangroves that provide critical protection to people … to drown,” she says.

Future studies, Jones says, can incorporate the newly reported threshold to anticipate mangroves’ response. From that, scientists may be able to determine which existing forests will survive, and which may need help migrating inland, such as by reshaping coastal landscapes to help the trees propagate.

“We need to get started yesterday to ensure these important ecosystems are around to protect us into the future,” Jones says.