Once upon a time, there was a swampy rainforest near the bottom of the world.

Buried sediment extracted from the seafloor off West Antarctica contains ancient pollen, fossilized roots and other chemical evidence of a diverse forest that flourished millions of years ago, less than a thousand kilometers from the South Pole.

The sediment offers the southernmost glimpse yet into just how warm Earth was during the mid-Cretaceous Period, between 92 million and 83 million years ago. By analyzing traces of vegetation in the sediment, researchers reconstructed climate conditions at the site. Average annual temperatures in the forest were about 13° Celsius, with summertime temperatures reaching as high as 20° or 25° C, the team reports in the April 2 Nature.

The mid-Cretaceous is known to have been one of the warmest periods on Earth in the last 140 million years, based on analyses of fossils and sediment collected from the seafloor closer to the equator. Atmospheric carbon dioxide levels are thought to have been at least 1,000 parts per million. (Today’s atmospheric carbon dioxide levels average around 407 ppm, the highest in the last 800,000 years.)

But for a forest to thrive so far south, even more potent greenhouse conditions must have existed than previously thought, with atmospheric carbon dioxide levels between 1,120 and 1,680 ppm, says marine geologist Johann Klages.

“It shows us the extreme potency of carbon dioxide — what carbon dioxide can really do,” says Klages, of the Alfred Wegener Institute in Bremerhaven, Germany. “Even without light for four months, [Antarctica] could still have a temperate climate.”

The team retrieved the 30-meter-long core from within the Amundsen Sea Embayment, where today fast-melting Thwaites and Pine Island glaciers drain into the sea (SN: 1/7/20). Even before analyzing the core, Klages says, the researchers knew it was special: The bottom three meters of sediment, corresponding in time to the mid-Cretaceous Period, showed traces of roots.

“We’ve seen many cores from Antarctica, but we’ve never seen anything like that,” Klages says. 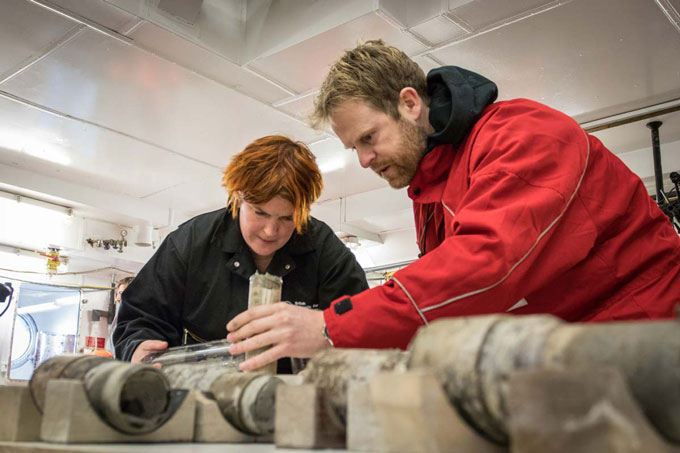 Researchers led by Johann Klages (right) analyzed seafloor sediment from off the coast of West Antarctica. Analyses of one sediment core revealed a dense network of roots as well as pollen, spores and other chemical traces of freshwater plants.Thomas Ronge/Alfred Wegener Institute

The pollen in the core suggested that this soggy, ancient forest was home to conifers, ferns and flowering shrubs, as well as mats of bacteria (SN: 5/16/11). Sediment analyses showed no traces of salt, suggesting it was a freshwater swamp.

The forest data are also strong evidence that Antarctica was largely ice-free during the mid-Cretaceous, Klages says. High carbon dioxide alone wouldn’t have been enough to keep temperatures balmy so close to the pole. If a bright white ice sheet were present, for example, it would have reflected much of the incoming sunlight back into space, keeping the land cold. But vegetative cover has the opposite effect, absorbing more solar heat and amplifying greenhouse warming.

The study represents “an unambiguous record of not just warmer conditions, but a diverse forest flora” at the South Pole, says Julia Wellner, a geologist at the University of Houston.

“This paper is a great reminder that, just because there [is] a continent sitting at the South Pole, [that] doesn’t mean it necessarily has to have ice everywhere, or even be particularly cold,” Wellner says.

As for what significance, if any, this finding might have to modern climate change, and Antarctica’s melting glaciers, Wellner notes that it is difficult to make direct parallels. Today’s atmospheric carbon dioxide levels are well below mid-Cretaceous levels, but climbing. And continental landmasses have moved over millions of years — pushed and pulled by Earth’s shifting tectonic plates — leading, in part, to ocean and atmospheric circulation patterns that differ from those of the deep past.

The study does highlight the powerful role of different feedbacks, such as the presence or absence of ice cover, to the overall climate, Wellner says. What role such feedbacks might play in the future is not yet clear. The current, existing Antarctic ice sheet, for example, could theoretically temper runaway greenhouse warming, even as carbon dioxide continues to accumulate in the atmosphere.

Klages agrees. “Ice present on the planet is a big gift,” he says. “And [we] should do everything we can to keep it.”